Why Should We Care Whether Students Complete Their College Degrees?

College degree non-completion is a critically important issue; currently more than 40% of students who begin college fail to finish their degrees. Non-completion rates vary by type of college. Among first-time, full-time undergraduate students who began seeking a bachelor’s degree at a 4-year degree-granting institution in fall 2007, the 6-year graduation rate was 58 percent at public institutions, 65 percent at private nonprofit institutions, and 32 percent at private for-profit institutions. Non-completion rates also vary according to institutions’ level of selectivity. The more selective the school (i.e. ones with the lowest admissions acceptance rates), the higher it’s 6 year graduation rate.

Students who begin college but leave without completing their degrees represent lost opportunities on national, institutional and personal levels. 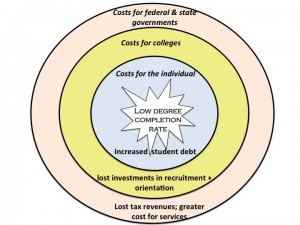 On the national level, an educated workforce is critical for competing in the world economic system, yet the U.S. currently ranks 16th out of 26 developed countries in terms of the percentage of 25 to 34 year old college graduates. As recently as 2003, U.S. ranked second (to Norway) out of 30 industrialized democracies in % of 25 to 35 year olds with at least a Bachelor’s degree (Mortenson, 2012).

25 to 34 years old college graduates, working year-round, earn about 40% more than similar age peers who attended college but did not complete a degree.

Since the federal government and 41 state governments rely on income taxes to fund government services, students who do not complete their degrees represent a major loss of tax revenue (Moreno, 2014).

On the institutional level, degree non-completion reduces college’s tuition-based funding stream, an increasing important revenue source in the current climate of federal and state defunding of higher education. With the recent trends in state- and federal- level defunding of higher education, colleges and universities have had to more and more rely on tuition dollars for an increasing portion of operating budgets.

Although the loss of any student because of degree non-completion is fiscally important for colleges and universities, even greater financial concerns are associated with students from some specific subgroups who drop out. International students, who represent an increasing percentage of U.S. college student enrollments, make up one such subgroup. Because these students pay almost three times as much in tuition as native students, international students who do not complete degrees represent a major loss of revenue for colleges and universities (Lewing, 2012).

Student veterans are another fiscally important subgroup. They make up an increasing percentage of the U.S. college student population and bring with them federal educational benefits under the Post-9/11 GI Bill (Cook & Kim, 2009; Fusch, 2011). Colleges and universities have a vested financial interest in promoting veterans’ college success as Congress is paying increased attention to student veterans’ degree completion rates (Shane, 2013).

While there has been increased attention to the issue of students’ struggles with increasing college debt, this issue is particularly critical for students who take on debt but leave school without completing a degree associated with higher lifetime earnings. Students who do not complete their degrees are more likely to default on student loans. The rising amount of college student loan debt has become a pressing issue in higher education, with no easy solutions in sight.

In 2011, two thirds of graduating seniors had student loan debt with an average of $26,600 per student (“Student Debt,” 2012). Student borrowing has increased to the point that a majority of freshmen at all institutions now borrow to pay for their education (Nguyen, 2012). In a 2012 analysis of borrowing patterns of college graduates and dropouts in the period 2001–2009, the percentage of students who borrowed to finance college increased from 47% to 53% (Nguyen, 2012). Not surprisingly, borrowers who dropped out were more than four times more likely to default on their loans (Nguyen, 2012).

The U.S. higher education system is experiencing a crisis of degree non-completion, and the negative effects of this crisis extent far beyond the institutions themselves. In their search for effective approaches for addressing this issue, many college and universities are turning to mentoring, particularly peer mentoring, as a vehicle for promoting student success improving degree completion rates.

Moreno, T. (2014). States without an income tax. About Money . Retrieved from http://taxes.about.com/od/statetaxes/a/tax-free-states.htm

Shane, L. (2013, January 7). How many student veterans graduate? No one knows.
Stars and Stripes. Retrieved from http://www.studentclearinghouse.org/about/
media_center/articles/files/StarsAndStripes_010713

1 thought on “Why Should We Care Whether Students Complete Their College Degrees?” 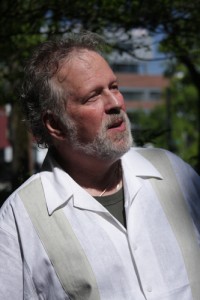